In 2009, Robert Hill, emeritus professor of adult education, INAS faculty affiliate, and dedicated potter, organized and facilitated a workshop at the Navajo Nation Museum sponsored by INAS and the Navajo Nation.The event brought together three master Navajo potters to teach the next generation. More than twice the expected number of participants showed up. Ultimately, the works of the apprentices were displayed in the museum alongside those of the masters and the exhibit also traveled to the chapter houses around the Navajo Nation.  Due to the success of the program, Dr. Hill also met with Haudenosaunee elders to discuss implementing a similar project for Haudenosaunee pottery.

An INAS-led team designed an historical recreation of a 1710 Cherokee town on the grounds of the Cherokee Heritage Center.  Principal design work was down by CED & INAS faculty member Alfie Vick, a landscape architect and ethnobotanist.  Dr. Jace Weaver and Dr. Brett Riggs, also worked on the project.  Diligwa opened in June 2013.  In 2014, the design team was awarded the prestigious Sevenstar Award for preserving and promoting Cherokee history and culture by the Cherokee National Historical Society.

An INAS and Cherokee Nation team, led by Anthropology & INAS faculty member and enrolled Choctaw citizen, Dr. Ervan Garrison, used non-invasive archaeological techniques that he has pioneered, to locate the footprint of the original Cherokee National Female Seminary, the first institution of higher learning for women west of the Mississippi which burned down in 1887. The Cherokee Heritage Center was built on the grounds of the original Seminary.  Team members located the original "long lost" building plans and solved other mysteries surrounding the school. the collaborative efforts of INAS faculty, graduate students, and Cherokee Nation institutions work led to an award-winning exhibition on the Seminary at the Cherokee National Museum and a permanent installation to mark the footprint of the school.

Dr. Garrison's team also surveyed the site of the Cherokee National Male Seminary, burned in 1910, and located in Tahlequah, Oklahoma, as well as surveying the site of Rose Cottage, Principal Chief John Ross’s home, burned by Stand Watie during the American Civil War. At the same time, the INAS-led team located a long-forgotten cemetery, believed to be the oldest in Park Hill, Oklahoma in the Cherokee Nation.

In 2013, INAS began a four year partnership with the Southeastern Indian Artists Association (SEIAA) on the first major traveling exhibitions of Southeastern Native art ever. Muscogee photorealist painter Bobby Martin, Seminole/Sac and Fox artist Tony Tiger and others exhibited work at the Lyndon House Art Center, Athens’ municipal museum and gallery.  The exhibit, The exhibit “Return from Exile: Contemporary Southeastern Indian Art” brought together more than fifty works by over thirty artists and opened at Lyndon House on August 22, 2015. INAS brought ten of the participating artists to Athens, along with Heather Ahtone, curator of Native American art of the Fred Jones Museum at the University of Oklahoma, and J. William Wiggins, noted collector of contemporary Native art, for a day-long symposium at Lyndon House. INAS also brought Muscogee/Seminole filmmaker Sterlin Harjo to screen his documentary This May Be the Last Time at the gallery during the exhibit.  Since closing at Lyndon House, “Return from Exile” traveled to venues in Arkansas, Florida, North Carolina, Tennessee, and throughout Oklahoma, through 2017.  A full-color catalogue of the exhibit was also produced.

INAS is always looking for community organizations, tribal nations, or other academic institutions for partnerships and collaborations. If you are interested in partnering with INAS or in being a part of our scholarship network, contact LeAnne Howe at lhowe1@uga.edu or native-studies@uga.edu.

Dr. Claudio Saunt and graduate student research assistants in Native American history have developed an interactive map that shows native territory and when it was claimed by the US.  This important research tool can be used to locate all the treaties, executive orders, and legislation that made Native America into the current territory of the United States. 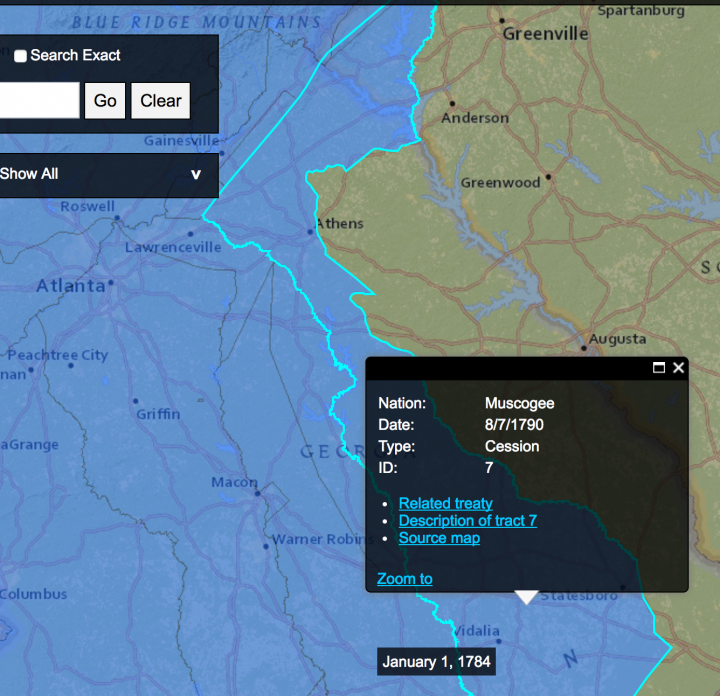 We appreciate your financial support. Your gift is important to us and helps support critical opportunities for students and faculty alike, including lectures, travel support, and any number of educational events that augment the classroom experience. Click here to learn more about giving.